Tech Review: Laying The Foundation: Making The Live Mix Work No Matter What! 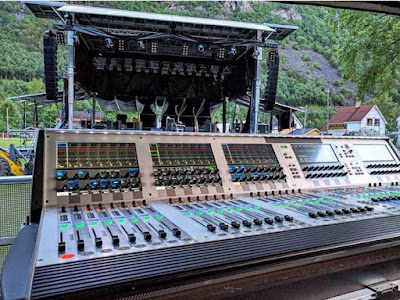 Face it, stuff happens. Sooner or later something stops working during a show.

Front of house engineers must know the absolute essential components of the sound mix that are most vital – in other words, the channels that the band must absolutely have to continue playing. Generally, for a four-piece contemporary band in a large venue, these channels are kick, bass, guitar, and lead vocal. Just four inputs, everything else is pretty much fluff and spares.

A bit extreme? Perhaps, but hopefully it clarifies the point.

A good house mix engineer is a prepared one. A well-planned input list allows any input from stage to go bad without adversely affecting the show. If the snare top mic goes down, use the bottom one, and maybe bypass a tom gate. Who cares if you go mono on the guitar, lose the bass mic, or anything else for that matter – nothing is that big of an issue if you’re prepared.

Say you’re doing a festival gig and the shed sounds terrible (stupid tin roofs), the system is nowhere near what you wanted, the promoter oversold the venue, half the people can’t hear the PA, band management is on the mix riser… and you’re up. What now? Panic, complain, blame everyone and lay on a big pile of excuses before throwing your arms up? No matter how bad things seem, freaking out only makes it worse. Step back, sum up the situation, and calmly solve the issues. Setting realistic goals definitely helps. Forget about creating the best sound anyone’s ever heard; rather, ask yourself, “what can I do to create the best sounding show possible with the tools available?”

As a house mix engineer, you are all alone. One of the more difficult concepts of front of house mixing is that the people who know what it should sound like best are on stage and can’t hear the mix. I found mixing monitors was challenging, but at least there was a possibility of a definitive “good” or “bad.”

A house engineer, on the other hand, is left with management, friends of the band, and the emotional expressions of the audience to be the blurry judge of success or failure. The upside is that you can get away with some major goof-ups. The downside is that the most amazing mix is met with being asked “how was it?” by the band.

My approach to dealing with this quandary is to divide the potential “sound of the show” into these possibilities:
A) The way I think it should sound based on input from the artist(s) and my experience.
B) The sound that the audience tends to respond positively to.
C) The sonic signature and sonic markers of the album.

It’s extremely important to merge and transition between these possibilities at will. As a “sonic politician,” your success and approval rating over time hinges on how well you can bring them into a consistent sonic presentation.

Never forget the bigger picture. Learning to operate the equipment gets your foot in the door and helps in solving (and avoiding) technical issues. Mastering the dynamics of mixing a show increases the emotional connection between the audience and the artist. Refining attitude and perfecting the ability to stay calm in the most stressful situations always helps. All of this is just the foundation. The true culmination of your efforts is achieving the state where the performers walk on stage knowing “if you‘re mixing, the sound will be awesome!”

Thanks Guys and always remember to keep the creativity perfected.