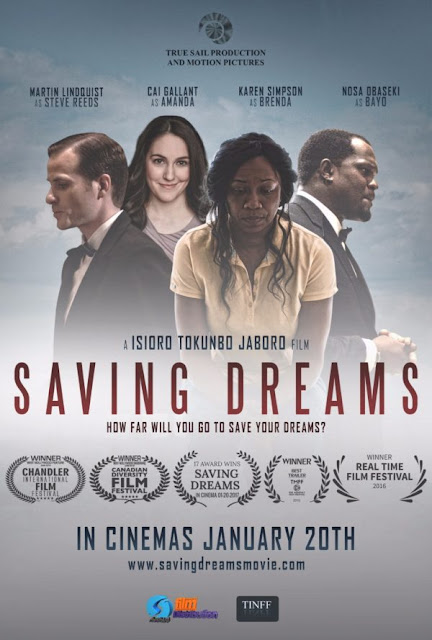 Saving Dreams is set to hit the Cinemas on the 20th of January 2017.

The Movie is inspired by real life events and depicts how far a person is willing to go in order to save their dreams.

Saving Dreams- directed by Isioro T. Jaboro, a “fiction,” based on real life events. Brenda Jackson (Karen Simpson) with dreams of stardom, marries a powerful man, Steve Reeds (Martin Lindquist) who promises to introduce her to people in the music biz. But instead, he abuses her while running a foundation that protects abused women. Surprisingly, he asks her to sing at a fundraiser for his new foundation. At that banquet, she meets Bayo Franklyn, (Nosa Obaseki) a Nigerian Immigrant who is a music producer who gives her his card. When Brenda stumbles into Reeds having an affair with Amanda Brook (Cai Gallant). Brenda takes that opportunity to make her escape. Now on her own, she starts a new life and reconnects with Bayo who gets her a record deal. Brenda’s song becomes a hit. Relieved, Brenda and Bayo make plans for their wedding, but Reeds has one more secret in his sick arsenal that may pierce their future happiness forever.