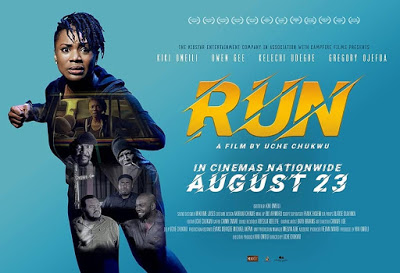 Multiple Award winning Actress and Doctor, Kiki. Omeili has released the trailer. for her debut feature film for Kixstar Entertainment Company titled 'Run', which is set to be in Cinemas from the 23rd of August 2019, Written and Produced by Kiki Omeili, Directed by Uche Chukwu, it stars Kiki Omeili, Owen Gee, Kelechi Udegbe, Gregory Ojefua, Olarotimi Fakunle, e.t.c.

Synopsis
Run follows the story of a hardworking, uptight young woman who lives a dull and routine life, witnesses something one night that throws her life into chaos and puts her in situations she has never been in before. She is then forced to do things that she has never done before to get herself out of the mess and back to her former life.

Watch the Trailer below: